"Success is peace of mind which is a direct result of the self-satisfaction in knowing you did your best to become the best you are capable of becoming."  - John Wooden

Coach Wooden’s coaching philosophy is no different than his philosophy on how to live. In a career so focused on competition (winning and losing), he never coached his teams to try to be better than their opponent. He simply taught his teams to try to prepare themselves to the best of their ability to be the best they could be - and the result would take care of itself. His most effective teaching tool was his consistent example.

Throughout all of our programs, Coach D’Alessandro and his staff attempt to help participants DEFINE SUCCESS. Coach Wooden’s philosophy on achieving “peace of mind” is the foundation to our approach on teaching. 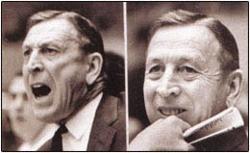 "Discipline yourself and others won't need to." - John Wooden

PAYING THE PRICE
People usually know what they should do to get what they want. They just won’t do it. They won’t pay the price. Understand there is a price to pay for achieving anything of significance. You must be willing to pay the price.

PERSISTENCE IS STRONGER THAN FAILURE
Persistence is a quality that we ourselves can control. You, and only you, can decide whether you will stay the course. 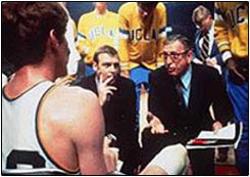 Coach Wooden was never concerned with his own accomplishments.  He was a teacher first.  He was hard-working and meticulous in his preparation and sought to instill values and moral integrity in his players.  His personal achievements were simply a by-product of these goals.  "Winning," he believed, was the natural result for his players and teams if they focused on the same goals. 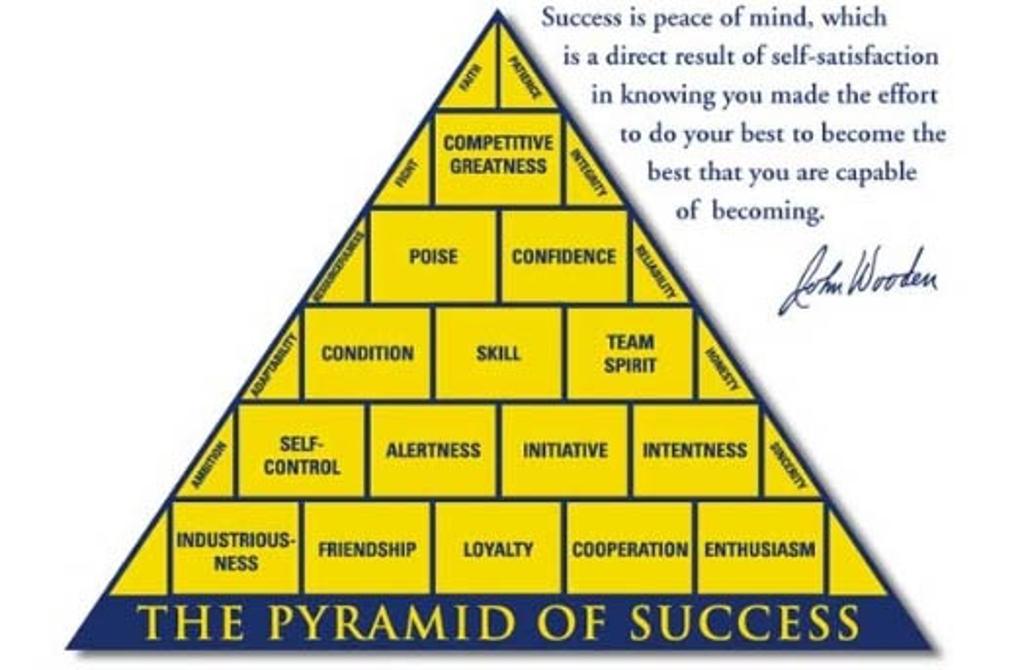 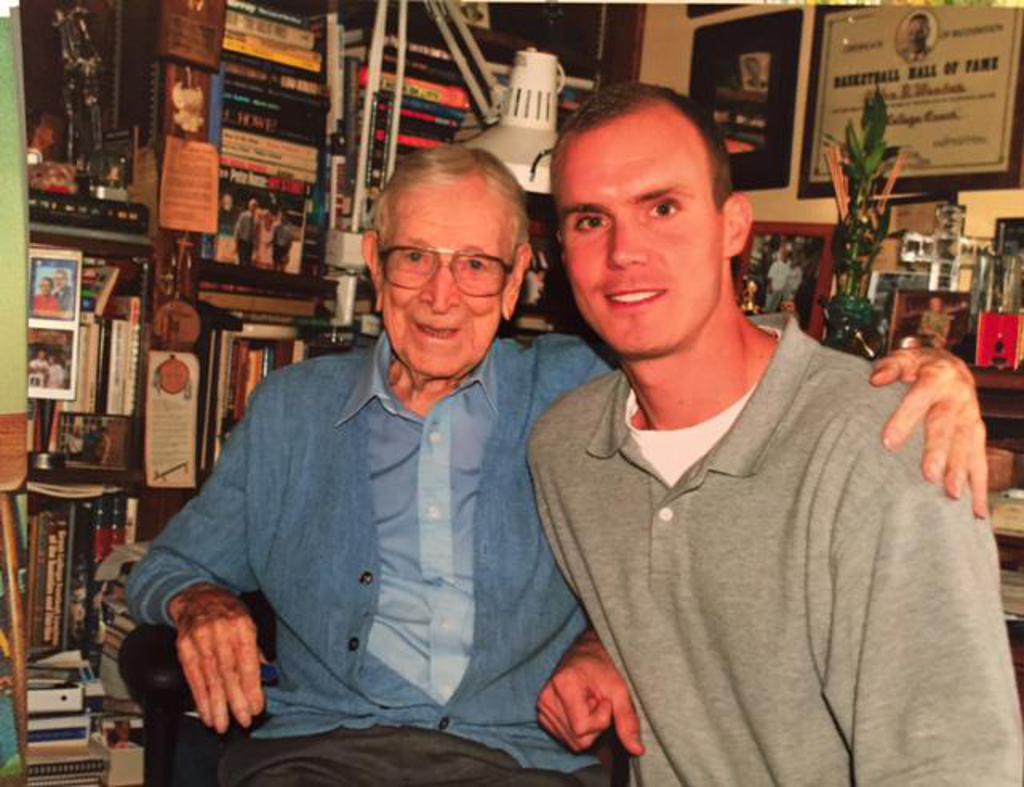 Coach Wooden and VABA's Executive Director, Ben D'Alessandro, in October 2005, formulating the vision for VABA and its mission - all based on Coach Wooden's Pyramid of Success.

"Be more concerned with your character than with your reputation. Character is what you really are; reputation is merely what you are perceived to be." - John Wooden

Coach Wooden is the most successful coach ever. And while his records may never be challenged as a “winner” on the court, his success is truly measured by the effectiveness he had on “coaching character.” His focus was on setting an example for young men and preparing them for life after they departed from his care. Through the game of basketball he accomplished this - and through the Virginia Basketball Academy’s teaching programs we hope to continue his legacy.

"Failing to prepare is preparing to fail." - John Wooden

BEING PREPARED
I used to say to an individual player who was unhappy because he wanted more playing time, “Young man, tell yourself, ‘I will be prepared and then perhaps my chance will come, because if it does come and I’m not ready another chance may not come my way very soon again.’”

SEVEN THINGS TO DO
(1) Be true to yourself
(2) Help others
(3) Make each day your masterpiece
(4) Drink deeply from good books, especially the Bible
(5) Make friendship a fine art
(6) Build a shelter against a rainy day
(7) Pray for guidance and count and give thanks for your blessings every day.

EIGHT SUGGESTIONS FOR SUCCEEDING
(1) Fear no opponent. Respect every opponent.
(2) Perfection of the smallest details that make big things happen.
(3) Hustle makes up for many mistakes
(4) Be more interested in character than reputation
(5) Be quick, but don’t hurry
(6) The harder you work, the more luck you will have.
(7) Valid self-analysis is crucial for improvement.
(8) There is no substitute for hard work and careful planning. 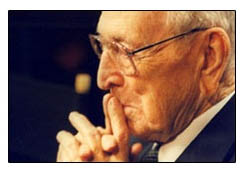 The Life of John Wooden

John Wooden was born October 14, 1910 and grew up in the state of Indiana. When Wooden was eight years old, his family moved to a farm in Centerton, IN (pop. 86). However, hard times forced his family to move off the farm six years later, so Joshua Wooden, John’s father (and the most influential figure in Coach Wooden’s life), moved his family again to Martinsville, IN and took a job at the local sanitarium.
Ever since his high school playing career he has been associated with success and winning. While at Martinsville High School, Johnny Wooden’s team played in the Indiana State Championship game three times, winning his junior year. He then enrolled at Purdue University in 1930 and led Purdue to a National Championship in 1932, while also winning the National Player of the Year award. Coach Wooden referred to his college coach, Piggy Lambert, as having “the greatest influence over me as a player and a coach.” At the end of a particular season, when Coach Lambert was asked by the media how well of a job he did as a coach that year, Coach Lambert simply said, “Ask me in 20 years and we’ll see how successful these boys are. Then I’ll be able to tell you if I succeeded as a coach.”

Following Wooden’s graduation from Purdue University, where he also received the Big Ten Medal for proficiency in scholarship and athletics, he turned down an offer to play basketball for the Celtics professional basketball team, and accepted a high school teaching and coaching position instead at Dayton High School in Dayton, Kentucky. It was in this first year as a high school coach that he experienced the only losing season of his career going 6 and 11. After two years in Dayton, he and his new wife, Nellie, move to South Bend, Indiana and where Coach Wooden began a nine-year stint as the head coach in basketball and baseball while also teaching English.

After joining the army at the outset of World War II, but never fighting because of a ruptured appendix, Coach Wooden returned to South Bend for a short time before accepting his first head college coaching position at Indiana State Teacher’s College. During his first year at Indianda State, Coach Wooden’s team won the conference title and a bid to the NAIA National Tournament. However, Coach Wooden turned down this invitation because the NAIA did not allow African-American players to compete. The following year, Indiana State won their conference title again. The NAIA changes its policy and Indiana State accepted the invitation - Clarence Walker, a reserve guard for Indiana State, becomes the first black to play in the NAIA Tournament.

Coach Wooden passed away on June 4th, 2010.  He spent the remainder of his retired years spreading his philosophy on life and success through numerous books and publications.